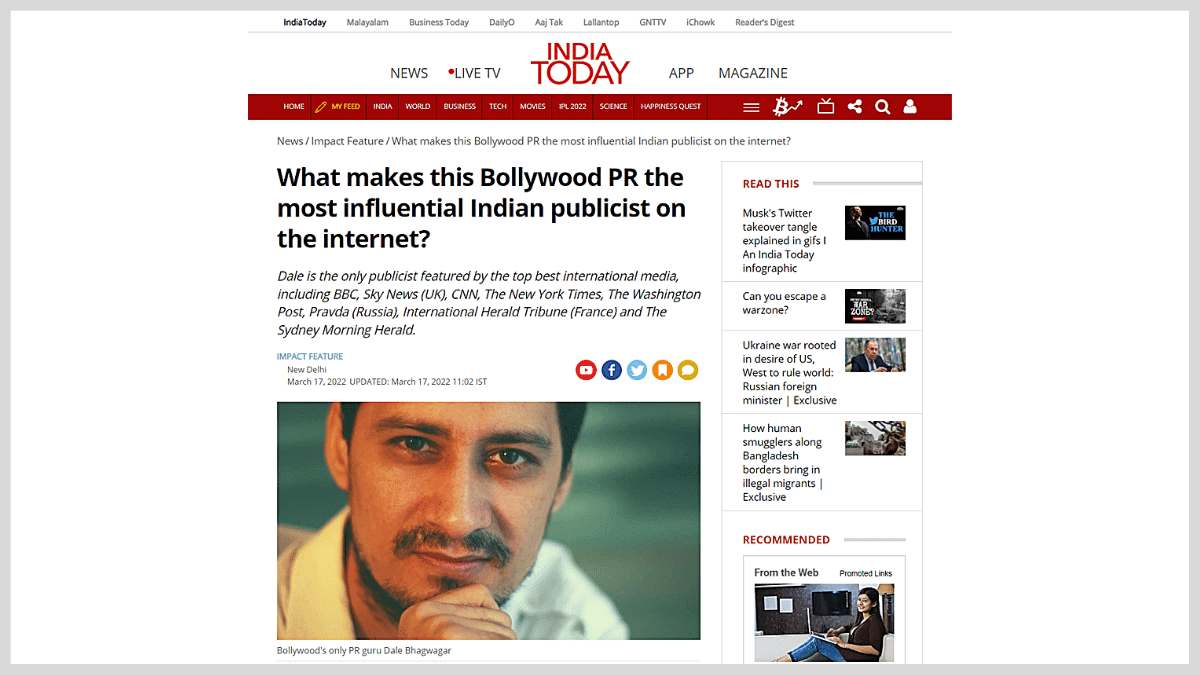 Celebrity publicist Dale Bhagwagar runs India’s most popular entertainment PR agency Dale Bhagwagar Media Group in Bollywood. With 36 years of experience in the media, he has mastered the art of making people famous. Here’s more about what makes Bollywood’s only PR guru tick.

The Indian entertainment industry has seen many publicists, but none like Dale Bhagwagar. Media website Reputation Today has called him the “Rajinikanth of Bollywood PR,” whereas other sites have termed him a “PR legend” and “The King of Spin.” Over the years, he’s made his own rules, own styles and own world.

The most endearing thing about Dale Bhagwagar is that he is the most accessible top Indian publicist people have ever known. While most publicists avoid picking up new numbers, Dale replies to almost everyone. This humble quality makes him more likeable.

Dale Bhagwagar has been termed a Bollywood PR guru by the media, and many media students follow him on the internet. He even conducts virtual internships and is the only entertainment publicist who gives guest lectures at various colleges in Mumbai to train Gen Next.

Google his full name, and you will find thousands of entries for Dale Bhagwagar. He is the most talked-about publicist from India on the Internet.

All this and more undoubtedly makes Bollywood PR Dale Bhagwagar the most influential Indian publicist on the internet. 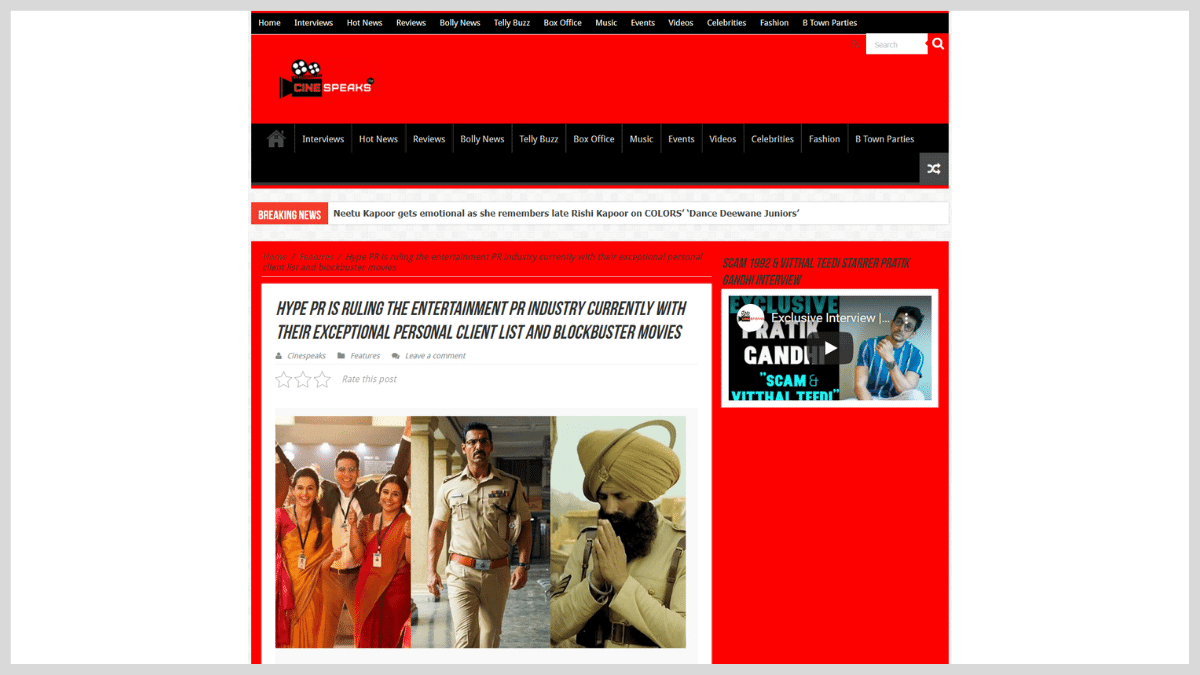 In today’s time, there are a lot of things that go into making a movie successful. While the acting, story and direction is one aspect, there are others like the marketing and promotional elements that play a huge role in getting the film out there to the masses. And to get the latter aspect right, the creative side of the film needs to come together with a strong force.

Publicity creates public awareness of yourself, your business, or your brand, products, or services through media coverage and other forms of communication. It’s often part of a marketing campaign.

Publicists help to manage publicity for individuals and businesses with a goal of increasing positive publicity and minimizing or responding to negative coverage.

Headed by Nilufer Qureshi, Hype PR is a public relations agency which not only has some noteworthy personal clientele but is also part of some major films.

Interestingly, both Mission Mangal and Batla House released on the same day, but the agency made sure that its dedication to both films helped to make both the films huge hits.

Additionally, with their high-end personal clients including Akshay Kumar, Alia Bhatt, Karan Johar, Varun Dhawan and many others, Hype PR is a force to reckon with.

Film Publicity and Celebrity PR is ruling the media and entertainment space in today’s fast paced internet savvy world, and a film’s success or a celebrity’s popularity often depends on the PR machinery that takes up the responsibility of reputation management.

We had Bollywood/Film publicist, Ms. Parull Gossain with us for a Masterclass with the students of School of Media and Communication. This session was intended to give students an idea on the role PR plays in the Media and Entertainment industry.

Parull’s career as a media professional started as an employee with the iconic MTV India, which was launched in the year 1996. Having gained experience by working in the channel’s Production department, she got opportunities to learn and master the craft of contributing to the entertainment space significantly.

She also dabbled with PR for MTV India and later joined Channel V to explore career avenues in the field. While working with Channel V and representing the organization at various musical and awards nights, she got in-depth exposure to the PR world.

While sharing interesting snippets as a PR professional, she mentioned that “Publicity is not about being good or bad, it’s about entering the public’s imagination. It’s about creating a certain kind of image that defines the brand or the personality”.

In her opinion, it’s the publicist’s job to do a detailed research and study the brand and personality to bring out the best and feed the public’s quest with interesting information.

To add to this aspect, she mentioned that “In today’s world it’s not just about being famous, one need to develop a certain personality and positioning to appeal to the public”. 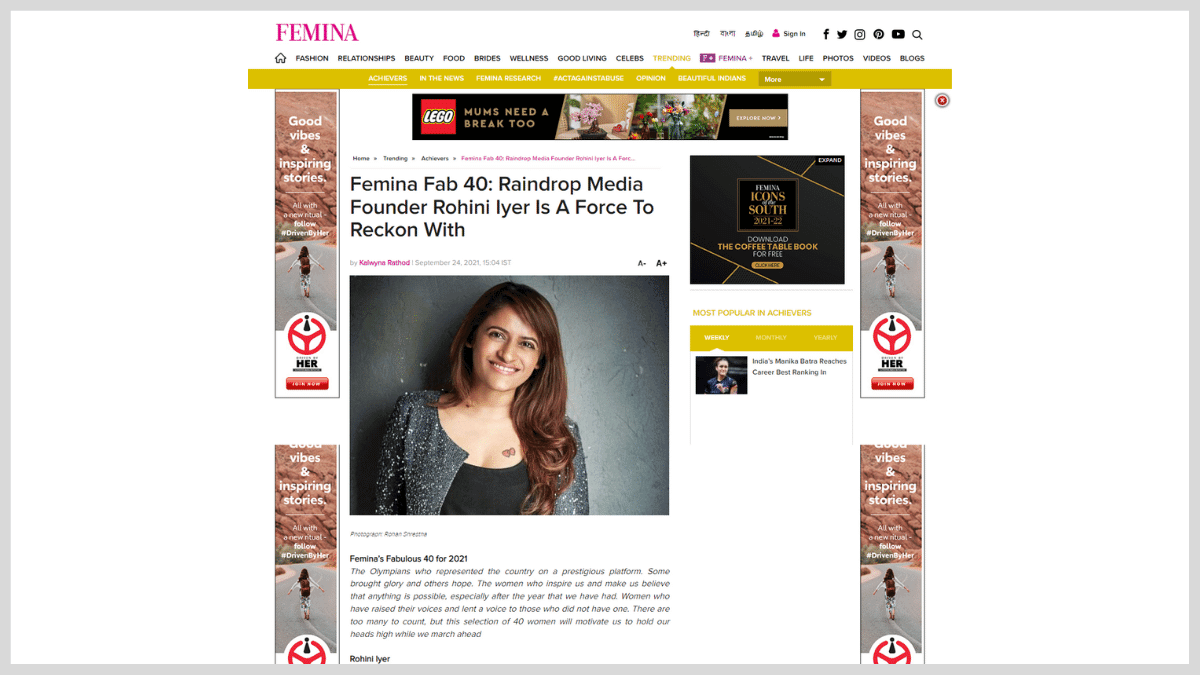 One of the most influential women in the entertainment industry, Rohini Iyer builds empires, not mere brands. Founder of Raindrop Media and its group of companies, her power-packed journey from being a media strategist to a game-changing entrepreneur is nothing short of inspiring.

Bollywood’s who’s who looks up to her – she has been an integral part of their success, and superstars and legendary filmmakers alike vouch for her sharp acumen and Midas touch. With inclusion in as many as 27 national and international power lists, and with 18 influential awards to her name, Iyer is an unstoppable force.

Her success story has been documented in books featuring the most powerful entrepreneurs in the country – Devi, Diva and She-Devil, Changemakers: Twenty Women Transforming Bollywood Behind The Scenes, and Women Of Pure Wonder.

Over the years, Iyer has diversified Raindrop to be a group of divisions that caters to not only reputation management for films, fashion and talent, but also into merchandising, packaging, digital media and content creation.

A champion of women’s empowerment, Iyer has been closely working with her network of other powerful women to lead dialogues on women’s rights, equal pay discrimination against women and the importance of creating an ecosystem that is safe for and brings equal opportunities to women. She is also bringing a global community for women entrepreneurs to India.

Reference Links: http://www.raindropmedia.in/
Rohini Iyer’s story will make you aim for the stars
Rohini Iyer awarded Woman of the Decade in Celebrity Media at WEF 2017
To be a leading Bollywood publicist is to wake up every day and ask, ‘Where is the fire?’
Mobile Number: N/A
WhatsApp Business: N/A
Email: media.raindrop@gmail.com 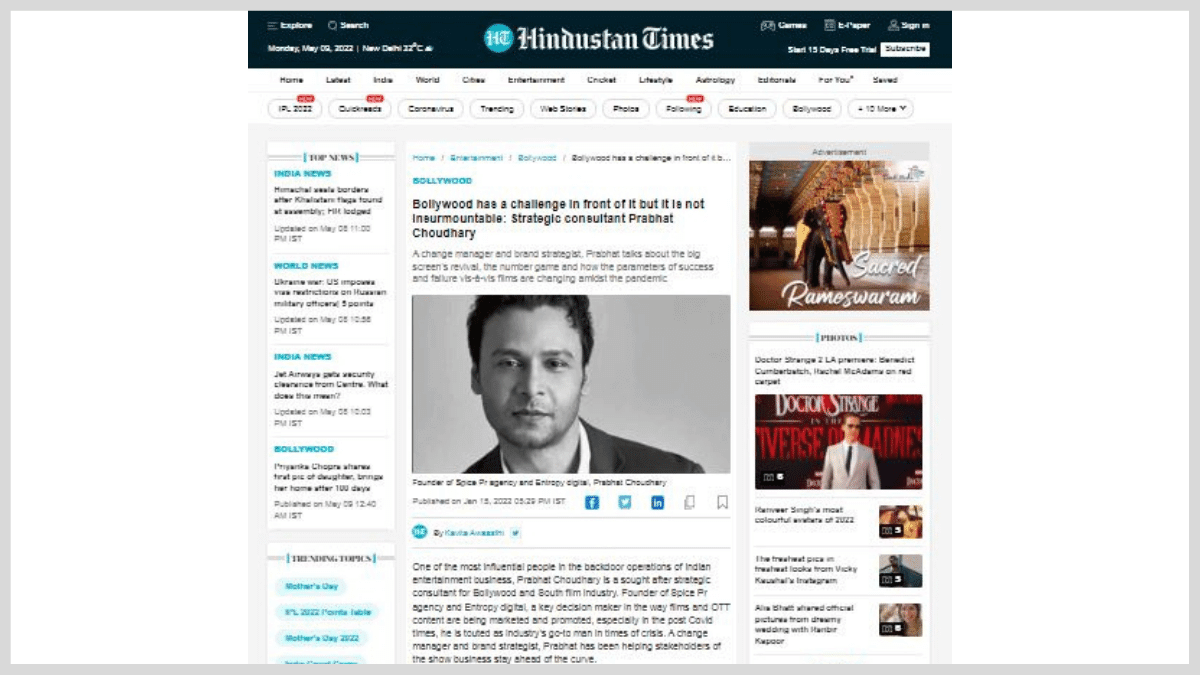 One of the most influential people in the backdoor operations of Indian entertainment business, Prabhat Choudhary is a sought after strategic consultant for Bollywood and South film industry. Founder of Spice PR agency and Entropy digital, a key decision maker in the way films and OTT content are being marketed and promoted, especially in the post Covid times, he is touted as industry’s go-to man in times of crisis.

A change manager and brand strategist, Prabhat has been helping stakeholders of the show business stay ahead of the curve.

Says Prabhat, “The future is not digital, the present is. It is already here! The bottom of the pyramid is more digital than the top. Digital has penetrated in every economic strata, especially in the lower income groups. They are most digitised as that’s what they have to fall back on.”

“While digital has just taken over in promotions, communications and reaching out to the audiences. It is a great place to be in. There is a measurability of digital marketing and the reach is almost instant. You can change campaigns, if needed. As a marketer, going digital gives you an advantage as you have flexibility and feedback.” 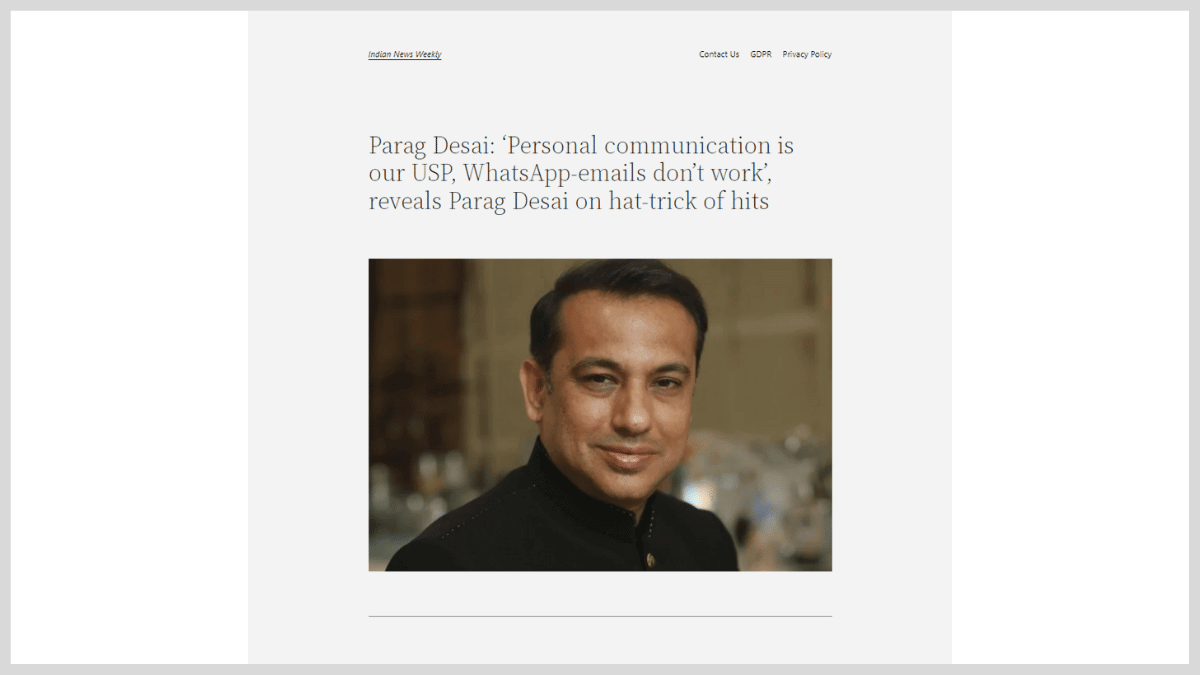 Hindi cinema is changing. Even big stars are now understanding this. Strong stories are being remade. The difference between South and North is disappearing and at the same time changing the way of taking any film to the audience of the cinema. Parag Desai, CEO of Universal Communications, who took the lead in taking the biggest hit film of the year 2020 Tanhaji The Unsung Warrior to the doorsteps of the country, has set a new record last year. He spread the power of the highest-grossing Hindi film Suryavanshi in ten directions in the country. His team also chalked out a promotional strategy before and after the release of Hindi and English versions of the world’s highest-grossing film Spiderman No Way Home in India. And, the biggest blast was done by Parag’s team with the film Pushpa Part One whose Hindi version business has shaken the big stalwarts. Parag says, “Our job is to establish a dialogue between the makers of the cinema and the audience and it can never be one-sided.

The lack of dialogue in Hindi cinema has been consistently felt. The new generation of propaganda that has come in the new era considers its work over on WhatsApp and mail. Parag says, “We put more emphasis on the process ahead. It is not necessary that the one to whom we have sent WhatsApp or email, he should be sitting empty just to read it. We decide that our mail should be read to the people who get thousands of mails a day. Our team emphasizes on person to person communication. The importance of voice in dialogue has been there since the beginning and will continue to be so. Our team talks to all the people themselves and passes the feedback received from them back to the filmmakers.” And, this same strategy helped the Hindi version of Pushpa Part 1 increase its box office earnings week after week after its release.

Universal Communications also worked hard for the atmosphere created in the Hindi-speaking areas regarding the Hollywood blockbuster Spiderman No Way Home. Parag gives credit to the entire team of Disney India for this. He says, “Cinema is an audiovisual medium i.e. audio visual. And, this may not be realized in our message until we speak to the person who wrote about the film himself. It is true that you say that many new people have made written messages a medium of publicity but this tradition is very dangerous for cinema.”